Bernadette Nelson and Michael Hay were left devastated after their daughter Emily died in the womb just hours before Bernadette went into labour.

Bernadette became ill after she suffered blood clots and an infection in her placenta.

However, as a lasting memory to their “perfect daughter”, Bernadette and Michael managed to raise more than twice their target of £1,500 to donate two cuddle cots to the Tulip Suite at Ninewells Hospital, a facility for families to spend time with stillborn babies.

Bernadette, 35, and Michael, 33, from Blairgowrie, spent three days with Emily in the Tulip Suite, which they said made a huge difference to them dealing with the tragedy.

Bernadette said: “We got to spend three days with our wee Emily in the Tulip Suite thanks to the staff and the cuddle cot. Since then, I heard people were getting only one night with their babies as there were not enough rooms or cuddle cots.

“We wanted to try to raise some money towards helping them buy one.”

After fundraising online through JustGiving, the pair looked to have raised enough to donate one cuddle cot to the Tulip Suite.

But after a successful bingo night organised by Bernadette last week, the total raised now sits at twice the original amount, just topping £3,000.

A cuddle cot, which regulates the temperature of stillborn babies so families can spend more time with them, costs about £1,500.

Bernadette added: “Emily’s name will be on a plaque on them. It has made me so emotional.

“Not only am I donating cuddle cots but my wee Emily’s name will be on a plaque on them forever.

“I didn’t know that would be done. I could choose my name or hers, so I chose Emily’s.

“I’ve been in touch with a charity called SiMBA. It’s for parents of stillborn babies and they are ordering two cuddle cots with Emily’s name on them.”

As SiMBA is a registered charity, it pays no VAT and also gets a reduction in the cost of the cots, meaning Bernadette and Michael can afford to donate two. 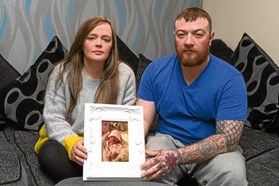