The Scottish public have voted in their thousands, and we are delighted to have been named winners in Scotland’s first Charity Champions Awards, set up to recognise and reward the countries charitable sector.

SiMBA were winners of the Charity of the Year (under £250k category) and Sara Fitzsimmons won the Inspiration Award.

The winners were announced after an intense few months of voting and judging and we’d like to thank everyone who took the time to vote. 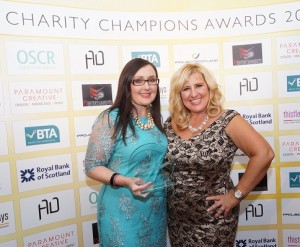