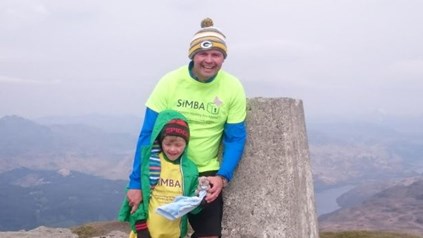 Colin and Dillan sharing a laugh during their Ben Lomond climb

It used to be the case that grieving mums and dads didn’t get any time to hold babies who are born sleeping.

But nowadays cuddle cots in maternity units are being used to help heartbroken parents spend more time with them.

And Lynn Carruthers, 32, and her husband Colin, 34, have just donated one of the cooled cribs to the maternity unit at Paisley ’s Royal Alexandra Hospital.

They were devastated when Jake was stillborn at 23 weeks and, due to complications, couldn’t spent the time with him they wanted.

Along with their six-year-old son Dillan, they have collected cash with a variety of fundraisers , including a hike up Ben Lomond.

Lynn and Colin are bringing comfort to others in their time of darkness.

On January 14, they had their lives turned upside down when little Jake was born sleeping 23 weeks into the pregnancy.

Lynn and Colin were told the agonising news during the pregnancy that their baby boy, Jake, had heart complications and would not make it.

She said: “We found out just after Christmas that Jake wasn’t going to make it.

“I had to carry him until January 14, when the plan was to have a natural birth.

“However, there were complications and I ended up giving birth via caesarean section and being put under general anaesthetic.

“Colin was able to spend some time with Jake, but I wanted to be completely with it when I was with him and that took a wee while as I was coming round from the anaesthetic.

“By the time I was ready to spend time with him, there had been some deterioration.

“Hospital staff went to get the ‘cuddle cot’, but, unfortunately, it was in use at the time and there is only one.”