We are delighted to announce that Webhelp Falkirk have chosen SiMBA to be their local charity partners.

Webhelp are based in Larbert, Falkirk. Vivian Eliza (Vee) was supported by SiMBA following an ectopic pregnancy in 2017. Vee organised an awareness stall for SiMBA and bravely shared her story with her colleagues.

"My story began on the 1st of May 2017 when I had severe abdominal pain and bleeding, but never at any point did I think I could be pregnant. Later that day I began to feel really lightheaded, when I called NHS 24  I was advised to go to the hospital straight away where the doctor told me that I could be pregnant and advised me to contact the Early Pregnancy Unit before I was sent home still in pain and shocked to the core.

I made an appointment with the Early Pregnancy Unit for the following Tuesday and that's when things just started to get worse. They asked me when my last period was and because I was on contraception I had no clue, they started to scan me and take blood tests. Nothing was found so I was sent home and had to come back every 48 hours for more tests. My life turned into a complete roller coaster, one minute I was healthy enjoying life the next I was told I may have miscarried my child. The tests continued for 2 weeks, each time they couldn't see anything but they couldn't see my left ovary or my left Fallopian tube. This went on until the 12th of May when, after another longer scan, the doctor came to me and said that I needed emergency surgery and that when I woke up I would no longer be pregnant. I had my scan at 3.40pm and was put under anaesthetic at 4.55pm. When I woke up the surgeon came to my bedside to explain how the procedure had went, she said that my left Fallopian tube had to be removed to save my life and as I sat trying to comprehend what had happened that day the surgeon advised me that she wanted to tell my partner what was going on. I've never been more thankful to have my family and my support network around me. After my surgery I mostly rested trying to deal with the pain but the following day was a lot tougher, I was being monitored to make sure that there were no complications when it sunk in that I had had a child growing inside me when they asked me to sign a form allowing them to cremate my little one. It brought a sense of realness to the whole situation. 2 to 3 weeks went by and there was a follow up when they confirmed how far along I actually was - I was 7 weeks and 2 days and in my mind I could not think how small that would have been.

A couple of months went by and I was desperate to find the plot number to see where my child was placed after cremation, during this period I was told about the work of SiMBA and SANDS. I received a Memory Box with some hand knitted items that were absolutely lovely and a little heart engraved for me. It gave me a sense of fullness, that my baby was real. It will always be remembered. I was given the chance to hang the heart in the spirit room in Forth Valley but I wanted to bring it home and keep it forever. Although it's been almost 2 years I still wonder why? Why me? What caused this? but in all their tests the doctors can't tell me. I want to use my story to tell women everywhere that this can happen out of nowhere and rock you to the core. SiMBA are such a huge support network and it's good to know that you are not alone and so many others are going through the same thing as you and want to help you and your family to get through it. The pain of the loss will never truly pass but the support can absolutely help you in every way possible." 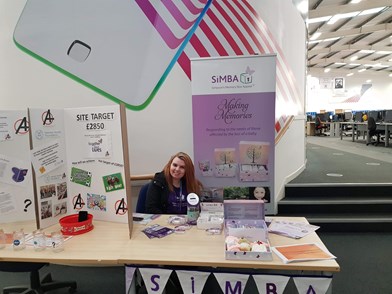 Gillian from SiMBA added  “Vee's story is incredible powerful and she has been so brave re-telling her story over and over to help to raise awareness. Vee and her team are so passionate and supportive of the work that we are doing and I am very excited to see what this year will bring." 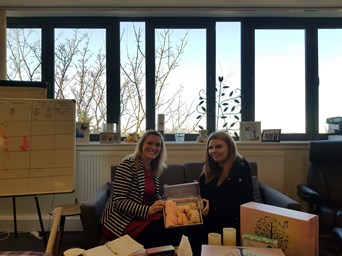 Thank you all for helping to make a difference!