FAMILIES affected by the loss of a baby gathered in the Inverness Botanic Gardens to release butterflies in their memory.

An estimated 230 people went along for the annual SiMBA charity event – making it its biggest yet.

The Simpson’s Memory Box Appeal (SiMBA) Charity provides support to families who have lost a baby to miscarriage, stillbirth or neo-natal death.

Susan Simpson, Highland ambassador for SiMBA, came up with the idea of a butterfly release six years ago.

"It was extremely well attended and the numbers continue to rise as people become more open and able to talk about their losses," she said.

This year was made especially poignant as an Inverness mother presented the charity with a cheque for £1000. 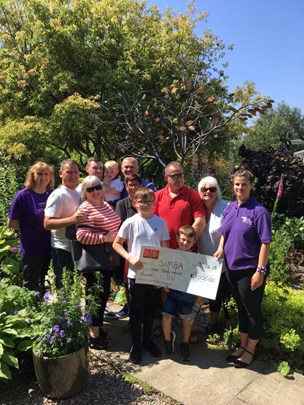 Stevie Dixon and her husband Liam lost their son Harry at 10 weeks old but since his death in May, they have been fundraising for the SiMBA charity, as well as the Scottish Cot Death Trust.

Mrs Dixon was there with the Inverness Military Wives Choir, who performed a touching tribute.

She said: "Nothing will ever bring back my boy but if I can do something good and positive then that is what I will keep on doing and make my baby proud.

"Raising money for these two amazing charities will hopefully help other families too."

Mrs Simpson was touched to be presented with such a large sum.

"It is a testament to how strong the family are, and to the tremendous support from the military wives choir, for them to do something so lovely in his memory so soon after losing him," she said.

"They want to keep his memory alive and do something special but at the same time it will have such an impact on others."

The butterflies were specially bred by entomological company Gribblybugs for the release.