The tiny baby was stillborn in March this year, leaving his parents devastated but determined to honour him. 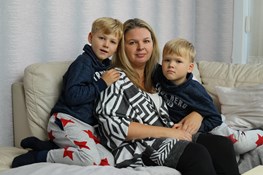 With sons Caleb, eight, and Blake, seven, Natalie and David thought their family was complete.

But they were over the moon to discover they were expecting again and announced the surprise at Christmas on their vlog - video blog - We're The Millers.

Natalie said: "It was a huge surprise, not planned in the slightest but just because it's not planned doesn't mean it wasn't wanted, of course.

"We were in shock and it was a big life change for us but we were happy and excited, looking forward to a new baby coming along."

Natalie went for a scan at 13 weeks and the baby was moving so much, the radiologist was unable to take measurements of him.

The 39-year-old, who described her little boy as "a wee tiny dancer in my belly", was told she would have to come back and was rebooked for 16 weeks.

She said: "It was at the time when the horrific snow was on so the kids were off school on the Wednesday and didn't know if we'd make it to the Royal Alexandra Hospital (RAH) for the scan or not.

"But there was something not right and I knew I needed to go for that scan that day."

Natalie added: "The boys were so excited to see the baby but she started scanning and I could see for myself the baby wasn't moving at all, which was completely the opposite from every scan we'd had before.

"I could see her face when she said, 'Could you take the kids out the room?' and I instantly knew."

A second professional was called to double check the ultrasound and it was confirmed there was no heartbeat.

David, 39, took Caleb and Blake to Natalie's gran, who lives nearby, and when he returned Natalie was "hysterical".

It was explained that the couple would have to return in two days' time to give birth to the baby. Natalie said: "So, as you do, I did a lot of Googling to find out as much as possible - you don't know what is going to happen to you, it's a whole new part of life.

"We were told we could see our baby afterwards but, obviously, at 15 weeks you don't know what the baby is going to look like.

"I was trying to find pictures of babies at 15 weeks because I wanted to know if I wanted to see the baby or not. It was quite a hard choice to make.

"I could only find one picture on the whole of the internet.

"There was nothing to explain what the baby would look like or explain in detail what you would go through and it was at that point I decided that I was going to vlog it, but I didn't decide if I was going to put the video up or not."

Natalie describes the staff at the RAH as "amazing" and said the couple went through a role reversal where David was "inconsolable" but Natalie didn't cry.

Aspen Jesse Johnston Miller was born at 4.28pm on March 2 weighing 1lb 2oz and his parents sat with him until midnight, when they decided to let him go.

Natalie said: "I felt quite peaceful and I felt glad we had that time. He had silly little features that reminded me of the boys and it was lovely to be able to know he was a boy.

"I didn't film too much but it's horrific, you're going through labour, you're birthing a child, and after I had him I felt better that I'd been slightly prepared because there's so little information."

Natalie and David chose Aspen because of the snow and his older brothers chose Jesse as a middle name because they had picked out Jessica for a girl - the name means "gift".

Natalie remembers how supportive their midwife was and how she phoned hours after her shift.

She added: "The midwife's shift finished about 7.30pm and she phoned to say that when she got home she put the TV on and there was a show about Aspen in Colorado.

"And I thought that was lovely as well. It's gone home with her, she's not left it at the door.

"These people must carry that with them all the time and it takes an exceptional person to do that."

The couple held a funeral for Aspen with just the two of them and said the funeral home provided all its services without cost.

Making the vlog post about her son also acted as therapy for Natalie - and allowed her to help other parents.

She said: "I thought a lot about putting it online but the feedback we've had has been out of this world.

"I didn't have to have that conversation over and over again. For me it was easier, I could to talk to the camera and there was nobody else there, yet I was talking to everyone so people knew.

Caleb and Blake talk about their little brother constantly, which Natalie said was hard at first but now feels completely natural.

She added: "Sometimes Blake will say, 'I wish Aspen was here,' but it's important for them not to be hushed or made to feel awkward about it because he's their brother.

"But I would never take that to heart because people don't know what to say.

"The thought of losing a child is incomprehensible. It's like no other grief.

"You change. I'm a completely different person from what I was this time last year. It takes a little bit with you."

When Natalie and David were told their son had died in the womb, the hospital introduced them to the charity SiMBA and they were given a memory box. 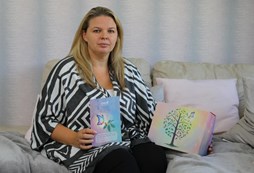 The boys wrote little notes to their brother and the box provided ways to make memories, such as a blanket and clay for hand print and foot prints.

Aspen's heartbeat has been stored in a Build-A-Bear and a relative named a star for him.

Natalie, who will have Aspen's ashes turned into jewellery, has not been able to read the boys' notes or any cards she received but is saving them in her SiMBA memory box.

While the grief is slightly less raw, the Millers are still readjusting to being a family of four.

A post-mortem examination failed to give any answers. Natalie said: "He was a perfectly healthy wee boy whose heart just stopped beating and there was no rhyme or reason to it."

Natalie says she and David have been brought closer together as they both uniquely understand the other's grief.

Their resolve was tested again two weeks ago when Natalie had another miscarriage, this time at nine weeks, and had to go through medical management once again.

She said she had felt something was wrong and booked in for a private scan where she was told this baby had also died in the womb.

Natalie had become pregnant with Aspen at the same time as her best friend from school, who gave birth to a baby girl two weeks ago.

She said: "She phoned to tell me when the baby was born and said, 'We've never been through this before so we need to find a way to work through it together.'

"It took me a few days. I would have ordinarily been the first person at the hospital. I was fine, I didn't cry. But it was hard, holding a newborn."

On her due date Natalie attended the SiMBA Butterfly Release in Glasgow and read out a poem. 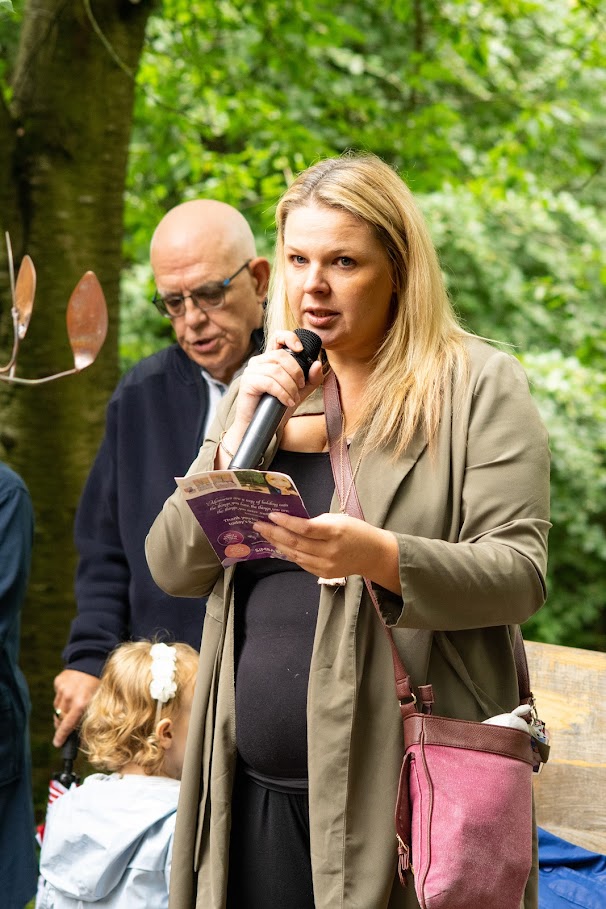 She said: "It was very, very, very hard but I want to mark it and I want to be strong for him and he deserves this and deserves to have his wee life celebrated."

The Millers are now preparing to take part in the Great Scottish Run next month to raise cash for SiMBA with all four doing the Family Fun Run on Saturday and David doing 10k on the Sunday.

Natalie also believes parents need to know there is help there for them.

She said: "I hope the vlog shows that. Some people wouldn't even contemplate taking a video but this was for helping other people. But he was my baby - I don't mind showing him.

"People thinks he looks like a wee alien, that's ok. But for us, he's our baby so that's not an issue for me at all.

"We've got two wee boys and the though of losing either of them is incomprehensible.

"Although he was only 16 weeks Aspen was our baby, our child, it's exactly the same thing. He was our son."

To donate to The Millers's Just Giving page for SiMBA visit (please note that this page link contains a picture of Aspen)  www.justgiving.com/fundraising/aspensarmy

To read the full article and to see Natalis's vlog for Aspen please click here : http://www.eveningtimes.co.uk/news/16609583.vlogger-natalie-miller-tells-of-grief-of-two-miscarriages/